Stories of Flour Bluff, the Little Town That Almost Was (#4) 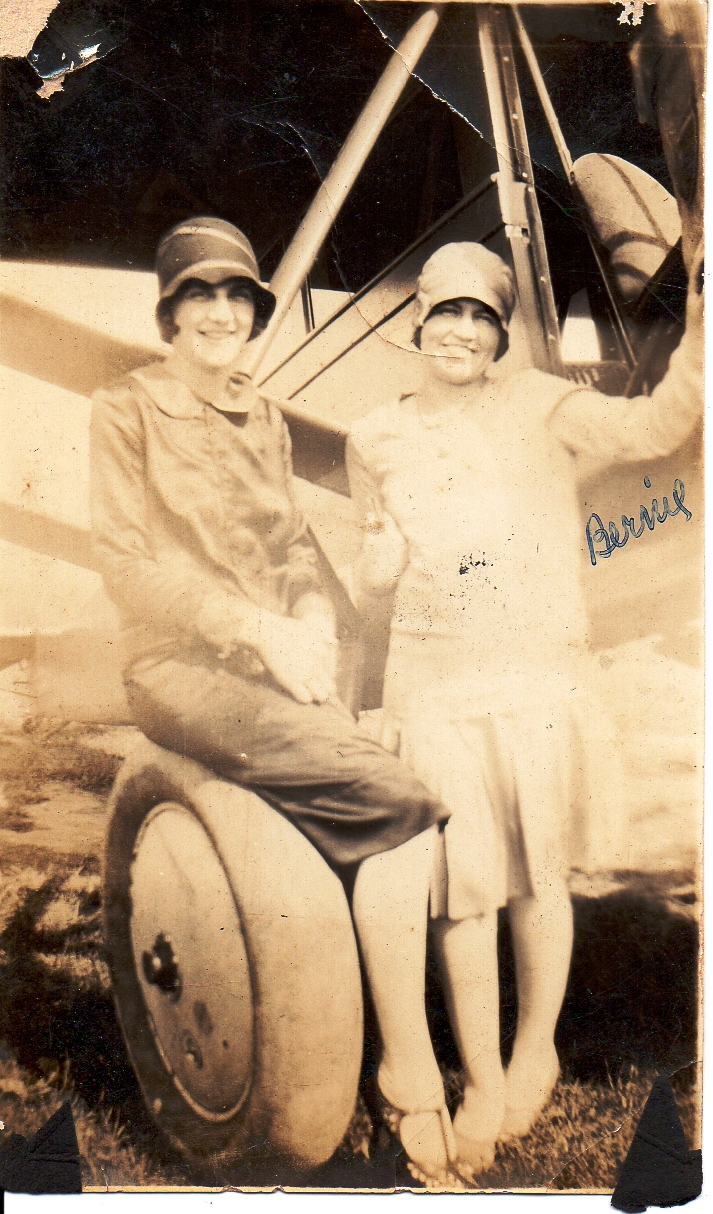 Three weeks ago the Blue Angels blew into the Bluff like a band of barnstormers.  In the days prior to the big event, they roared through the skies leaving jet streams to alert all of us on the ground that they had arrived and that the air show had come to town.  Oh, how those Angels made everyone jump as they appeared out of nowhere, dropped us to our knees, and zipped across the sky in their shiny F/A 18 Hornets.  Then, the day before the event, these rock star pilots swept into Veterans Memorial High School where they wowed the crowd, signed autographs, and left the children knowing that they, too, would one day be Blue Angel pilots, at least in their dreams. But, this story is not really about the Blue Angels.  It’s about a woman named Bernie, born September 2, 1899, in Bowie, Texas, to J.M. and Minnie Lee Harlan, who roared into Flour Bluff in 1950.  To understand this woman known as Bernie Arnold to the Flour Bluff community, it is important to take a peek into her early years.

Coming of age in the Roaring Twenties seemed to shape Bernie.  Growing up in a town with the name of an Alamo hero who helped carve out the West, Bernie started carving out a life for herself in a male-dominated world.  As a little girl, she watched as automobiles replaced horses and buggies. She saw how the airplane brought the possibility of leaving the earth.  Bernie evolved just like the world – fast and furiously.  She was a self-liberated woman who never let anything hold her down, not even gravity.

Bernie, like a handful of adventure seekers (mostly male) took up flying in 1927, just 24 years after the famous Kitty Hawk flight.  She married young, the first time to Sam Coffman, an aviator and inventor.  Coffman designed, built, and produced the Coffman Monoplane, a three-passenger cabin plane that sold for a few hundred dollars.  He even tested a glider in 1930, which resulted in a broken leg, a broken ankle, and two broken wrists. The Coffmans were an aviation family, teaching their two sons, Sam and Jim, to fly at very young ages while big Sam continued to make a living giving lessons, building and selling planes, and creating a very successful business.  Bernie later divorced Coffman and married Ross Arnold, her flight instructor.  He was a barnstormer who took part in cross-country flights, so Bernie naturally turned to the life of a flying circus performer, going from town to town to show off her skills in loops and dives.  This life introduced her to the likes of Charles Lindbergh, Wiley Post, Amelia Earhart, and even Howard Hughes when her husband Ross signed on as a pilot for Hughes’s film Hell’s Angels.

A barnstorming beauty, Bernie was the first female pilot to take off from Meacham Field in Fort Worth, Texas. She spent the succeeding years flying around the country and into the lower Yucatan jungles where she and Ross Arnold frequently flew across the Gulf of Mexico, hauling chicle’ from Yucatan to railroad terminals in Mexico.  The gum business ended after three months of operation in 1927 when the natives became unexpectedly hostile to them. The duo then took their air show to the most remote points of the United States. Recalling her barnstorming adventures, Bernie said, “First we’d fly over a small town and buzz it soundly so that all the people would be attracted.  Then with all the town’s eyes on us, we’d land in a pasture nearby for the crowd to flock around. In order to make enough money to buy gasoline, we’d take up passengers.”  Arnold lost his life in July 1929 while on an endurance flight in Des Moines, sponsored by the Des Moines Register newspaper.  Miraculously, a reporter riding with Arnold escaped serious injury. This event brought Bernie’s barnstorming days to an end.

This grounded Bernie for a short while, but she continued to have an interest in aviation.  She became one of the few ticket agents in the country and went on to manage an air travel bureau for four pioneering airlines out of Ft. Worth, Texas, just 68 miles from her hometown of Bowie.  With the coming of WWII, Bernie took to the skies again.  Both of her sons became military pilots.  Lt. Sam Coffman was a flying instructor who died in a plane crash in Pecos, Texas, while on a training mission.  Jim Coffman served as an Air Transport Command pilot out of Palm Springs, California. Bernie, with a desire to help the war effort coupled with her love for flying, volunteered for duty with the Air Transport Command, where she served until 1945.  Bernie’s service to her country did not go unnoticed as she received an identification card on December 10, 1945, from Colonel R. J. Pugh that would grant her entry into any Air Force Station.

At the end of the war, Bernie hung up her wings and moved to Corpus Christi, Texas, at the invitation of her friend and fellow pilot, O. L. Holden.  She and Holden went into business together, opening a sporting goods store on Water Street in Corpus Christi.  They simply named it A & H Sporting Goods.  “We were open 24 hours a day,” said Bernie.  “We had to be.  We didn’t have a door on the place.”  Soon, she got wind of an effort to build a causeway across the Laguna Madre to Padre Island. Bernie’s spirit of adventure and keen eye for business prompted her to buy land at the corner of Laguna Shores Road and what is now South Padre Island Drive.  The new causeway opened in 1950, and her new sporting goods store sat in the perfect place.  Thousands of visitors to Padre Island stopped in at A & H Sporting Goods, owned and operated by Bernie and her son Jim Coffman.  Bernie’s arrival in Flour Bluff, Texas, would lead her to new heights in business, local politics, and community service. Bernie would become a key player in Flour Bluff, the little town that almost was.

Retired from education after serving 30 years (twenty-eight as an English teacher and two years as a new-teacher mentor), Shirley enjoys her life with family and friends while serving her community, church, and school in Corpus Christi, Texas. She is the creator and managing editor of The Paper Trail, an online news/blog site that serves to offer a glimpse into the past and present of the little community of Flour Bluff.  She wrote for The Flour Bluff Messenger, wrote and edited for The Texas Shoreline News, a Corpus Christi print newspaper that existed from December 2017 to April 2020, served as copy editor on three books, and continues to tutor students of all ages in the lively art of writing.