. . . wishing the weather forecasters had been more precise. First, we were informed that a storm had formed in the Western Caribbean on July 30, but that it really was not a big threat to us. Later, it brushed the western coast of Cuba, but we were told the winds were not expected to go above 90 mph, so most people in Corpus Christi didn’t even bother to board up their windows. Many were caught unprepared for the strong winds and devastation to follow.

. . . standing first at one window and then another. On the hot afternoon of August third, much of life seemed to be unfazed. THEN came winds, and all the phone lines went dead, and all electric power was gone by about 3:00 p.m. There was hardly any rain, and that turned out to be a good thing. At least, we thought, this is a “daylight” storm and not one that hit in the middle of the night. But, that was not much consolation.

. . . making sure nap time in the hallway had swept our two toddlers away from this real-life nightmare. Luckily, we lived in a sturdily-built older home and not in an apartment. Most of the second-story apartments in town were being terribly damaged. Wooden fences across the city were being strewn around like a large game of “pick up sticks.”

. . . hearing the thud of trees which had seen thirty years but would not see the next one. Giant palm trees shook our home as they hit the ground. A huge tree in our front yard lost all its limbs. By then, we were nowhere near any windows or doors! But, since it was a trash pick-up day, we could hear metal trash cans rolling down the street as if they were racing each other to some finish line.

. . . wondering when it would end. There was a brief quietness as the winds changed directions, but we knew better than to venture out into the eye of the storm. We did dare to look out the windows at downed trees and downed power lines as far as the eye could see. Neighbors across the street had lost their front porch. Windows had been broken by flying objects.

. . . finding life from Kingsville, Texas, on the battery-operated radio dial. It was a welcome sound, but the speaker had no news from the Corpus Christi area. There were no cell phones, no Wi-Fi, nor were computers around with which to stay in contact with anyone outside the area. After the storm stopped, it was seventeen LONG days and nights before electrical power was restored to our side of the street. Think about that!

. . . feasting on the bounty of a silent, but well-stocked refrigerator… only because we had a gas-powered stove. But, alas, most of the food was destined to be thrown away because of lack of further refrigeration. And, it would be days before any trash trucks were able to pick up trash. Eww!

. . . thanking God that we only lost replaceable items and were able the next day to somehow criss-cross our way through some barely open streets to check on other family members around town. Everyone had a story, and none of them would forget!

. . . vowing to never stay for another storm headed this way and to never, ever name a child for CELIA! (The song “Ce-Ce-Celia, you’re breaking my heart” brings back this storm in my mind.) 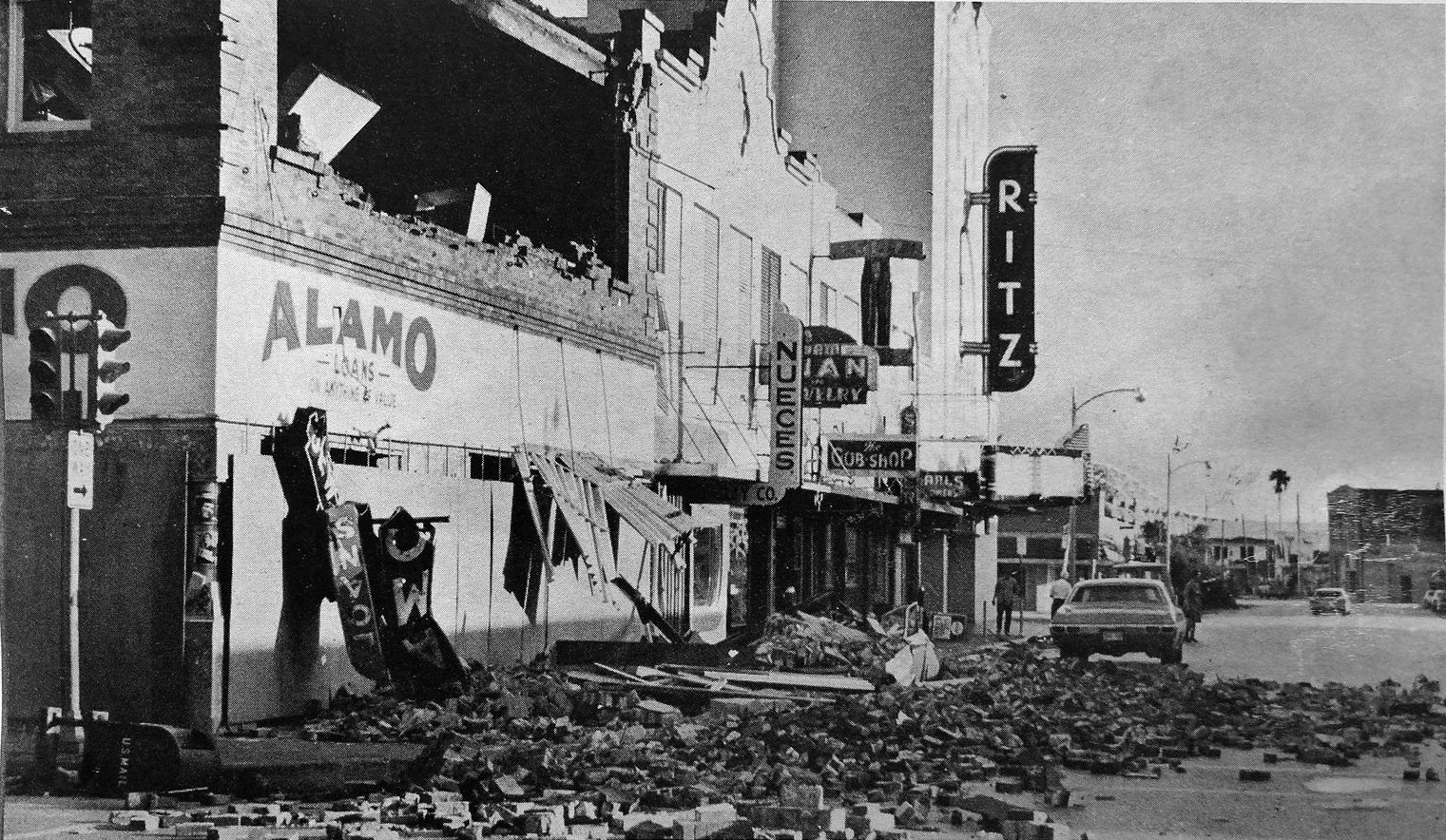 Many photos and stories can be found online of Celia’s devastation to the area, and one can find the estimated cost in 1970 dollars for rebuilding. Where Sutherland’s store is now located on Staples, there used to be a store called Woolco’s. It was fairly flattened. The streets were lined with downed power lines. One estimate said about 80% of buildings were affected by Celia’s winds. Damages would have been worse had there been huge rain amounts or a larger storm surge, too.

Padre and Mustang Islands had few buildings compared to today. There was a store on the way to Padre Island called Jito’s and a hotel called The Million Dollar Inn. The storm surge swept through the entire first floor of the now-defunct hotel. For those who today have property on Padre and Mustang Islands, please heed any order or warning to evacuate…if you value your lives. Doing otherwise is foolish. You cannot get help during a storm, and if the surge is great, whatever is left of you and your belongings might never be found. Research another bad storm of the area that hit in 1919 before storms were given names. Families on North Beach were swept toward Sinton. Few survived. My grandparents’ generation of men were asked to help gather bodies.  A so-called “Hurricane party” is a truly horrible idea.

For those who dwell in the city and decide to stay for a storm, do not expect to get cash from an ATM, buy gasoline, get prescriptions filled, buy groceries, or gather supplies after the fact. Stores and their cash registers all work with electricity. You need several days of water for each member of the family. Buy a clothes line that could be used for hanging hand-washed clothes. One only has to think back a few weeks to remember a thirteen day “water boil.” If a storm has a large amount of rain or a large surge from the Gulf, who knows when the water from your taps will be suitable for cooking, bathing, or drinking? If you need more home insurance, remember that no one will sell any insurance to you if there is already a storm in the Gulf of Mexico. Think ahead! Locate all important papers and take them with you if you leave, or put them in a waterproof container if you stay. If you decide to leave, don’t wait too long. For one storm, it took us over ten hours just to get to San Antonio. And if there are any relatively NEW citizens in the area who have some warped notion that storms are fun, I sincerely hope you change your mind and take hurricanes seriously. For those of us who were here on August 3, 1970, Celia made an indelible imprint on our minds.

Spread the love           Jeanie Lou lived down the street from us. She and my older sister Margie were ...