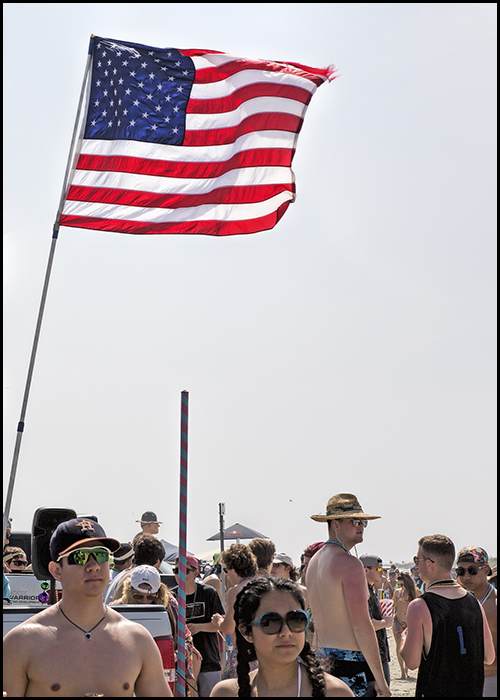 Summer has arrived in South Texas, and if it wasn’t for the heat and humidity, it would be the best season of the year.  The long summer days provide ample time for outdoor activities such as fishing, baseball, swimming and of course, celebrating Independence Day.  As I write, I can almost smell the smoke of barbecue pits and hear the sounds of fireworks.  Flags are being removed from closets and are unfurled on lawns, in gardens, and along the beach shore.  It is a glorious day for our nation and our people, and it is a day worthy of the greatest celebration of the year.  John Adams, one of the authors of the Declaration of Independence, wrote to his wife, “I am apt to believe that it will be celebrated by succeeding generations as the great anniversary festival. It ought to be commemorated as the day of deliverance, by solemn acts of devotion to God Almighty. It ought to be solemnized with pomp and parade, with shows, games, sports, guns, bells, bonfires, and illuminations, from one end of this continent to the other, from this time forward forever more.” However, John Adams was referring to July second because this was the day the Continental Congress approved a resolution of independence declaring the United States independent of Great Britain.  July 4th was the day the Declaration of Independence was signed; however, not everyone signed on that day.  The last person to sign the Declaration of Independence was Matthew Thornton, and he signed on November 4th of 1776.

While John Adams was wrong about the date, he was certainly right about the celebration.  Independence Day has been celebrated annually since 1776.  In the New England states, it was the custom to begin the celebration on July 3rd with a bonfire, and towns competed to have the largest bonfire.  The largest bonfire recorded was made from wooden barrels that were stacked in a pyramid shape that was forty barrels high.  The custom is still practiced in some New England towns today.  In 1778, General George Washington marked July 4th with a double ration of rum for his soldiers and an artillery salute.  In 1781 Massachusetts became the first state to recognize Independence Day as a state celebration.  In 1870 the U. S. Congress made independence day a federal holiday for employees.  Today the celebration continues with picnics, barbecues, parades, fireworks, patriotic displays and of course, a big sale down at the Walmart.  And naturally politicians want to get in on the celebration and can often be found on Independence Day delivering political speeches filled with nonsensical rhetoric and balderdash.

With all of the celebration, it is sometimes difficult to understand the significance of Independence Day or the Declaration of Independence.  However, in the preamble to the declaration, we find these words.  “We hold these truths to be self-evident, that all men are created equal, that they are endowed by their Creator with certain unalienable Rights, that among these are Life, Liberty and the pursuit of Happiness.” This is one of the best known sentences in the English language and has influenced many other nations declaring independence.  The French Declaration of the Rights of Man and Citizen is one noteworthy example, but it has been used with variation by many other nations including Venezuela, Liberia, Viet Nam, Haiti, New Grenada, Argentina, Chile, Costa Rica, El Salvador, Rhodesia, Hungary, Czechoslovakia, New Zealand, and others.  Despite the influence our declaration had on the world, it was our independence that was important, and it is our independence and our birth as a nation we celebrate.

Too often our Independence Day is referred to as the Fourth of July or simply July 4th.  I think this diminishes the significance and causes confusion especially to younger people who are not well versed in history.  I am reminded of the college student who saw the Declaration of Independence for the first time and remarked, “How cool is that?  They signed it on the Fourth of July,”  Make sense of that if you can.