Unless you have been vacationing in outer space, it is all too likely that you have heard more than you wanted to hear about the first presidential debate. I know I have, but most of what I have heard has missed the point.  For example, the moderator was biased, each candidate won, each candidate lost, Hillary Clinton looks great in a red pant suit (I made that up), Hillary was presidential, Donald Trump was presidential, and more.  Well, you get the idea, but there were a few points of substance that are worthy of consideration.

One candidate promised to raise taxes on the wealthy and make them pay their fair share and to redistribute the tax money gained to college students, green energy projects, and perhaps some other pet projects that I do not recall. Certainly, this appeals to college students and others ignorant of how taxes actually work.  Consider this: I recently reviewed a corporation’s annual financial statement and determined that they were paying a 40% effective tax rate.  What would happen if their tax rate was raised to 80%?

If the burger joint goes out of business, it must fire the college students that it employees, and certainly they will be worse off. If it raises prices, the super-duper deluxe burger will now cost seven dollars, and the college students buying the super-duper deluxe burger will be worse off.  There is also the chance that people will begin buying less super-duper deluxe burgers, and the business will close anyway.  The truth is businesses do not pay taxes.  Businesses merely pass tax increases on to the consumer, and all politicians know this.  When a politician tells you that they are going to make the rich pay their fair share and raise their taxes, they are only trying to deceive you.  Taxes are always paid by the consumer, which is, of course, you and me.

The other candidate promised to lower taxes. I do not want to bore you with the tedium of another example, but I trust that it is sufficient to say that lowering taxes will have the opposite result of raising taxes.  As in our previous example, the burger joint would be able to lower the price of the super-duper deluxe burger, benefiting all consumers, or they could open another burger joint employing even more college students.  Regardless of how you view it, lowering taxes will benefit everyone.  There really is no downside except to politicians because they will have less money to squander on their pet projects.

There are other ramifications to taxes on businesses that people too often do not consider. What if our burger joint wanted to export the super-duper deluxe burger to England, and the tax remained the same at 40%, but France also wanted to export their version of the super-duper deluxe burger to England, and they had a tax rate of 20%?  If everything else was the same, England would likely import the French version because it would sell for four dollars instead of five dollars because of the lower tax.  The truth is taxing businesses makes them less competitive.  If our burger joint relied solely on exports, they would either go out of business or move their business to France and pay the lower tax.  Either way their college student employees would be worse off.  Politicians are also aware of this, so when they pretend that they are helping you by raising taxes on business, do not believe them.  They are merely trying to feed you a load of horse apples. 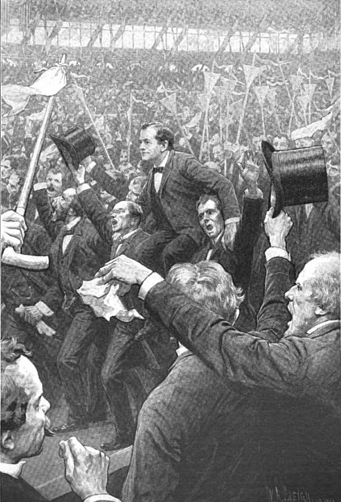 The “trickle-down” theory was introduced by William Jennings Bryan in his Cross of Gold speech given at the Democratic National Convention in Chicago, Illinois, in 1896.

One candidate described trickle-down economics as a failed system, but that is not true. Trickle-down is achieved by lowering taxes, and as you can see from the burger joint example, lowering taxes provides for business expansion which results in increased tax revenue overall.  This method was tried and proved during the Reagan era, and the benefit carried over into the Bill Clinton era which accounts for part of his economic success.

Despite our $20 trillion deficit, one candidate proposed additional spending as a way to get the economy going again. This is lunacy in a pant suit.  No country has ever spent itself into prosperity.  Spending more than you take in is the definition of bankruptcy.  It is a simple concept, yet politicians continue to make the claim, and apparently the poorly informed continue to believe.

There were other minor points, but I have already allowed this to run longer than I would like, so to close I would say, one candidate wore a pant suit, and the other was right.

No wonder Mark Twain quipped, “Politicians and diapers must be changed often, and for the same reason.”