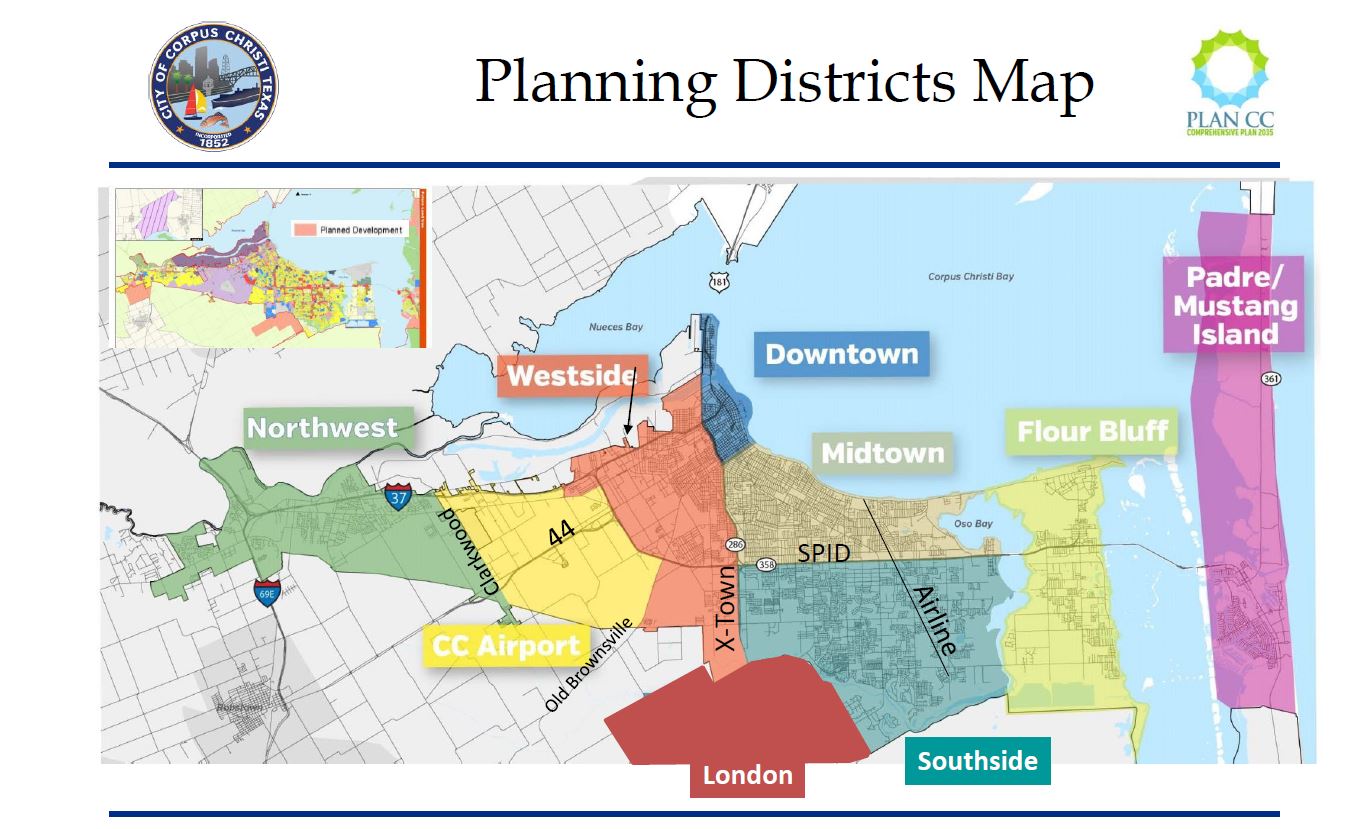 Citizens of Flour Bluff were educated on area development plans (ADPs) at the July Flour Bluff Citizens Council general meeting where Dan McGinn, Director of Planning and Environmental Strategic Initiatives, defined what area development plans are, how they are connected to Plan CC, the city’s comprehensive plan, and plans for re-writing the nine area development plans, including the Flour Bluff ADP, which has not been revised since 1993 even though the 1987 Comprehensive Plan stated that all plans would be reviewed and revised every five years. Those in attendance were encouraged to look around the Flour Bluff community and take note of improvements, enhancements, or changes needed or wanted in the community in order to be prepared for future FBADP meetings when the real planning begins.  They were asked to look to the future and envision Flour Bluff in 20 years, a daunting task to say the least.

Flour Bluff encompasses an area of about 18 square miles and is home to 22,876 (according to the 2014 counts), which is about 7% of the total population of Corpus Christi, according to a presentation given by McGinn to the Corpus Christi City Council the day after the FBCC meeting.  Until the Ropes Boom around 1890, Flour Bluff was for the most part inaccessible except by boat.  Flour Bluff Point, where NAS CC sits today, was identified by the 40-foot dunes that graced the landscape.  This area attracted activity (i.e. fishing, packing plants, trade routes) on the perimeter of the Encinal Peninsula, but actual long-term settlements did not take root until the Ropes Boom around 1890. It was then that the few families who moved into the area began building houses (which they moved frequently); fishing; farming;  raising dairy cattle;  establishing a post office;  starting a school;  and building bridges across the Oso and eventually across the Laguna Madre to Padre Island.  They were seeing Flour Bluff as a land of many uses, but without the tethers of local government.

All was quiet for a while until oil was discovered, which brought many new families to the area, followed by the biggest growth in population with the building of NAS Corpus Christi. With the Navy base came a water line that would bring a source of water more reliable than the individual wells that had at times gone dry.  Electricity, phone service, an independent school district, thriving businesses, a county building with a constable, and other community elements such as churches, sports teams, and civic groups had Flour Bluff functioning as a town, but not officially.  By 1950, the talk of incorporation had begun.  The people of Flour Bluff, a fiercely independent group, wanted to be in control of what happened on their little piece of the planet, something that has not changed.  If they can’t turn back the hands of time and become a town of their own, then they certainly want to have as much influence as possible on what happens in their own back yards.  But, who else will have a say-so in the writing of the plan?

According to the City of Corpus Christi’s website, “The Planning Division is responsible for developing and updating of the City’s Comprehensive Plan, Area Development Plans, Neighborhood Plans, and assisting with Utility and Infrastructure Master Plans.  The Comprehensive Plan contains the city’s policies for growth and development for the land within the corporate limits and the extraterritorial jurisdiction of the city. The Comprehensive Plan is mandated by City Charter, Article V, and includes future land use, annexation, transportation, economic development and public services and facilities, and capital improvements.  The plan may also include any other element the City Council may deem necessary.  The Comprehensive Plan is a series of stand-alone documents, referred to as elements of the Comprehensive Plan.”  It should be noted that these plans are not law and can be changed.  Plan CC states:

McGinn explained that other key players would be involved.  The Navy still has a great deal of influence over the area, as does the State of Texas, the EPA, and TCEQ.  Add to that outside developers, utility companies, and the tourist industry, and the influence of the local citizenry on the plan seems to lose impact.  One member of the FBCC said that the plan may be necessary as part of the City Charter, but the people must be vigilant before, during, and after the document is written.  “How many people actually read those little rezoning signs that pop up here and there? We should make a point of not only stopping and reading them but calling the number to see what is about to happen.”  He went on to suggest that the City could add a link to the web page that lists every proposed zoning change so that the citizens can easily attain the rezoning information.  This, he thought, would be the most effective way of controlling what happens in Flour Bluff since it is apparent that the area development plans are easily overridden by these zoning changes that go unnoticed unless someone is watching. Melanie Hambrick, Chairperson of the FBCC Committee on the FBADP, has taken on the task of gathering knowledgeable and willing Flour Bluff citizens to take part in the process, but it is the responsibility of every citizen to pay attention to what is going on in their own neighborhoods.

Flour Bluff (and Padre Island) is unlike the other areas of the city because it has distinct geographical boundaries created by the Cayo del Oso, the Laguna Madre, Corpus Christi Bay, and King Ranch.  The FBADP is also one of the oldest on the list.  The map below shows the boundaries of each ADP, while the chart offers the timeline for development of each plan.  A group of Padre Island residents recently wrote their own ADP, which was accepted by the City Council in January of this year.  McGinn indicated that even this plan would need to be revised with the assistance of Texas-based city planning consultants.  The city planning department currently has two full-time employees to take on the task of re-writing the plans.

The FBCC meeting was the first of many to come.  The FBCC encourages all those who live, own property, or have businesses in Flour Bluff to stay abreast of this issue and consider taking an active role in the planning process.  The FBCC will post information about upcoming meetings on its website and Facebook page.  In the meantime, it might be a good idea to watch the city council meetings on television or in person, take note of zoning changes in the Flour Bluff area, and stay connected with the community so that the citizens can work together to preserve what is great about this little community while improving the areas that are in need of upgrades.

Spread the love     As Flour Bluff School ends its 128th year of educating children, it only seems appropriate to revisit the ...