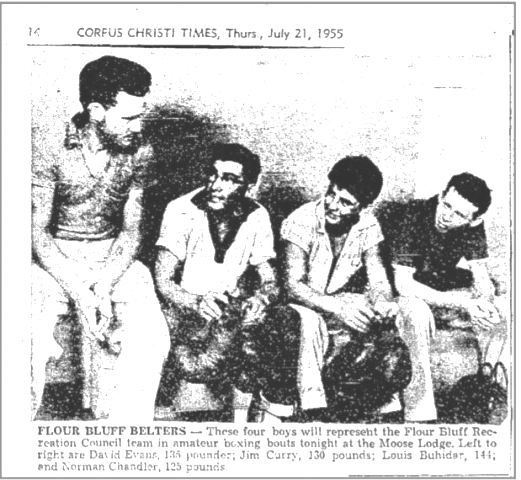 April 1, 1955, amateur boxing matches were held at the Flour Bluff High School gymnasium.  The program, started by the Flour Bluff Recreation Council, continued until 1962.  The contenders at the first event were as follows:  Connie La Roe, Calvin Self, Robert Wheeler, Antero Molina, Carl Donnell, Louie Buhider, Roger Barker, and Tommy Jarrett.  They competed against boxers from Corpus Christi’s Pan American Club and the Naval Air Station.  The Flour Bluff  Community Council, chaired by justice of the peace Johnny Roberts and composed of representatives from the Flour Bluff Lions Club, Flour Bluff ISD, the Better Citizens Organization, and churches in the Flour Bluff area, had the idea for starting a boxing team in 1954.  According to the Caller-Times article, the program was “designed to provide wholesome recreation for youth in the area.”

According to Roberts, Lee Carr, deputy constable in Flour Bluff, and other men in the area had been helping some of the boys work out in the evenings.  Sponsoring boxing matches was evidently the next logical step.  The Navy allowed the group to borrow its portable boxing ring, and the school allowed them use of the gym for the matches.  J. Hanham Cook of the Optimists Club and Glen W. Littrell, assistant principal at Baker High in Corpus Christi, were able to get the organization approved by the Amateur Athletic Union.

The Flour Bluff Community Council also built a $9000 arena that would seat 1500 people for $800 in November of 1955.  According to Clyde Nelson of the FBCC, most of the materials and labor were donated.  John Nicholson, lifetime Flour Bluff resident and local business owner said, “Back in the fifties, there was a boxing ring set up across from our store. They would all come on, I think, Saturday night. It was lit and drew quite a crowd. This is the location of the drive-through beverage building, now a construction company.”  By January 25, 1956, Flour Bluff had two Golden Gloves entrants: Onterio Molina and Jimmy Evans. They would be the first of many Flour Bluff youth to vie for Golden Gloves trophies.

Community member Carroll Ross had this to say about the article written by Caller-Times sports writer Joe Scherrer regarding  the first night of fights:  “Didn’t you know that those eight Flour Bluff High School boys who put on a show that inspired some shouting that threatened at times to shake the steel ceiling on the handsome Flour Bluff gym were fighting for the first time in competition?”  In a lengthy letter by Ross to Scherrer, which he used in place of his column, she said, “The hurrahs came from parents and adult friends of the boxers, of course.  They also boomed out loud and unmistakably from brothers and sisters, and schoolmates. (The babies in arms did not root, but they were there, too!)”

Spread the love         Finally, the Democrats and Republicans are working together, and as a result we got the ...