The Paper Trail Front Page,Human Interest,Opinion/Editorial Santa Is Not the Only One Watching

Santa Is Not the Only One Watching 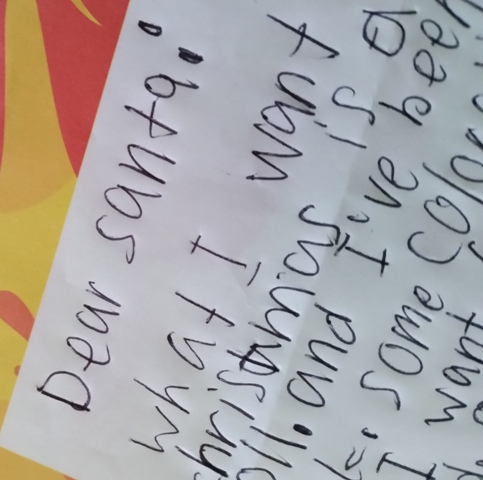 It’s that time of year again when we resolve to make changes in our lives.  Many of us will vow to lose weight, exercise more, quit smoking, quit drinking, spend less and save more, eat healthier, get organized, give more, spend more time with family and friends, or do something else that will somehow make us feel better about ourselves.  According to all the research, most of our resolutions will die before the month of January runs out.  Maybe this happens because we think our failures only affect us. Maybe we need to shift the reason for change to those who love us and look to us as examples.

Recently at a community event, I had the opportunity to read some letters to Santa before they were shipped off to the North Pole.  Most of them went something like this:

What I want for Christmas is accessories for my doll.  And I’ve been meaning to get more books and some color pencils.  That is all I want.  I know I’ve been good, so I hope I could get the stuff on my list.  I know you are watching, and I might have been a little bad, but I hope that’s okay.  I can’t wait for you to get here.

The one that got my attention and prompted me to write this piece is the following:

Children know that Santa is watching, but do the adults in their lives understand that the children are watching?  Do they think about the seeds they are planting?  Do the parents of the author of this letter realize what their child is learning?  Remember the scene from Jean Shepherd’s A Christmas Story when the main character Ralphie drops the f-bomb while helping his dad change a tire?

Ralphie as Adult: [narrating] Only I didn’t say “fudge.” I said THE word, the big one, the queen-mother of dirty words, the “F-dash-dash-dash” word!

Mr. Parker: [stunned] What did you say?

Mr. Parker: That’s… what I thought you said. Get in the car. Go on!

Ralphie as Adult: [narrating] It was all over – I was dead. What would it be? The guillotine? Hanging? The chair? The rack? The Chinese water torture? Hmmph. Mere child’s play compared to what surely awaited me.

The dad immediately reports the incident to Ralphie’s mom who is aghast at her son’s behavior.  Then, she does what every good mom does, she launches an investigation.

Mother: All right. Now, are you ready to tell me where you heard that word?

Ralphie as Adult: [narrating] Now, I had heard that word at least ten times a day from my old man. He worked in profanity the way other artists might work in oils or clay. It was his true medium; a master. But, I chickened out and said the first name that came to mind.

This scene always makes me chuckle.  Listening to Schwartz’s mom scream over the phone when he is fingered as the “bad example” by Ralphie’s mom is strangely funny.  The whole thing reminds me of my little brother’s early mastery of profanity.  Some of his first words were curse words, and I can still recall my parents trying to convince other people that he was saying something else and that it just sounded like the word they thought they heard.

My brother went on to mimic my dad in other ways.  He became a drinker, just like the old man.  At first, it was just what he did to have a little fun.  Then, it was only something he did on the weekends.  Finally, it became the reason he got up each morning.  He preferred the company of other drinkers over those who suggested he call it a night, proof that misery indeed loves company. We were shocked when we received the call about the wreck that took him from us way too soon – but we weren’t surprised.  The seed of good-time-Charlie drinking had grown into the invasive plant of alcoholism, and it choked the life right out of him. Of course, he – like Ralphie – bears the brunt of the blame. After all, he knew what drinking could do to him.  And, parents certainly can’t be held responsible for their child’s behavior forever. Excessive drinking, like so many vices, is a selfish act, one that ruins all it touches.  Sadly, the drinker rarely sees how it affects everyone else until it’s too late.

Sometimes we simply plant the wrong seeds in very impressionable minds. Left unchecked, these seeds will grow into something we can’t stand to watch or that is extremely difficult to uproot. Instead of focusing on how our resolutions can help us,  maybe we should resolve to  do something that blesses the lives of those around us.  By choosing to get along, children will experience joy instead of heartache.  By opting to quit drinking, the fears of family and friends who truly love and care about the drinker will be assuaged.  By deciding to live healthier lives, we can live longer and be more of an asset to those who need us.   When we choose to do that which blesses another’s life, the resolution takes on a purpose that is larger than the smallness of helping ourselves.  Have a happy new year, but don’t forget who’s watching.