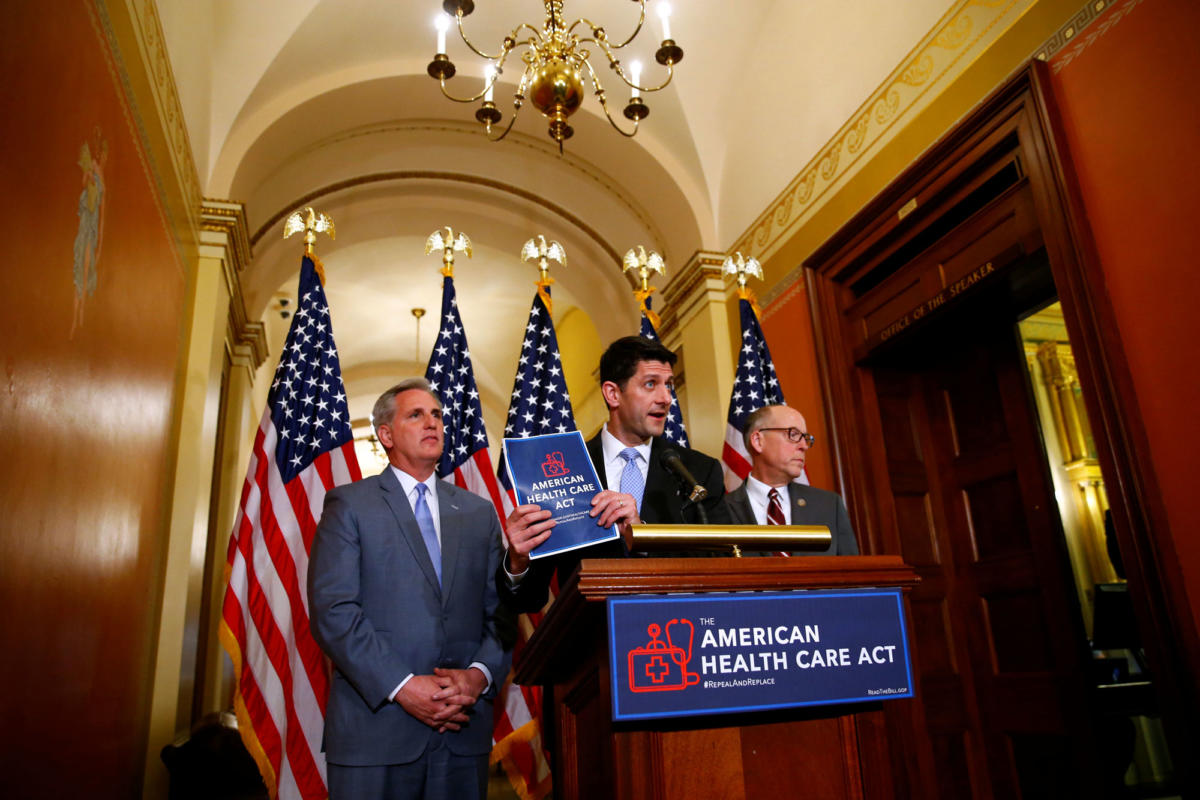 Paul Ryan, Speaker of the House

At last, the Republicans have released their 123-page missive called the American Healthcare Act (AHA pronounced Ahh-Ha).  They claim AHA repeals the “Patient Protection and Affordable Care Act,” otherwise known as Obamacare.  Unfortunately for us, it references Obamacare throughout the legislative document, so in order, to fully understand their intention, you need to read the nearly 2,000 pages of the Obamacare legislation.  This is not what I had in mind when I voted for representatives to repeal Obamacare. I kind of prefer simple language. You know like, “The Patient Protection and Affordable Care Act is repealed effective May 31, 2017.”  Please remember the Constitution of the United States of America is a mere 22 pages.

In typical Republican fashion, they attempt to appeal to some imaginary supporters like Nancy Pelosi, and Chuck Schumer. They always seem to forget who elected them, and obviously forget these famous words from Nancy Pelosi:  “Bipartisanship is nice, but it cannot be a substitute for action.”

To provide full disclosure, I must admit that I only scanned AHAs 123 pages, but several things are clear. First, the Republicans like the provision that allows parents to insure their adult children because they retain the provision for keeping children on their parents’ policy until the age of 26. I think this is great, but if you are still so immature that you are a dependent at age 26, you should not be allowed to vote until age 27. Further, your parents should pay the full cost of your coverage. It should not be subsidized by your parents employer or the government (taxpayers).

The Internal Revenue Service continues to play a big role in AHA. You may recall that the IRS hired several thousand new agents to enforce Obamacare back in 2010. The Republicans apparently want them to continue monitoring your healthcare because the IRS is referenced 16 times in AHA. They have a role in enforcing health savings accounts as well as various exemptions, deductions or tax credits. If reducing healthcare cost was a goal, the IRS could better spend their time reducing Medicare and Medicaid fraud, not monitoring citizens’ healthcare expenditures.

President Trump has made it very clear that our healthcare system should be a free market system, but unfortunately the Republicans do not have the same faith in the free market system. The AHA turns the market over to exchanges and state insurance regulators. The term free market cannot be found in AHA; although, the word repeal is found 15 times. And while there is no provision to purchase insurance across state lines, the welfare provisions in Obamacare remain, but the Republicans have juggled the way the welfare provisions are administered. People who pay no taxes still get a tax credit which is refundable (more welfare spending).

The Republicans claim this is just the first step of a three step process, but they offer no details of the other two steps. This puts citizens in the same position we were in when the original act referred to as Obamacare was passed. The act will have to be passed in order to find out what is in it.

There is much in this legislation, most of which is not good if you wanted Obamacare repealed. The AHA merely nibbles around the edges. However, I should not close without saying that abortion gets mentioned 11 times. Apparently, the Republicans found the courage to de-fund Planned Parenthood abortions for one year maybe. I am not sure who this will appeal to, but since I am on the subject of abortion, this AHA legislation looks a bit like a Kermit Gosnell botched partial-birth abortion. Please consider that I did not bring up abortion for the sake of controversy. The Supreme Court long ago decided that we all have a choice with regards to abortion. The choice is Pro-life or Pro-death;  you decide.

While Chuck Schumer was not referring to the IRS directly, he said, “Decisions ought to be made by doctors, not accountants.”