The Paper Trail Front Page,Personal History Tales of Little Ruthie: The Creek and the Tire Swing

Tales of Little Ruthie: The Creek and the Tire Swing 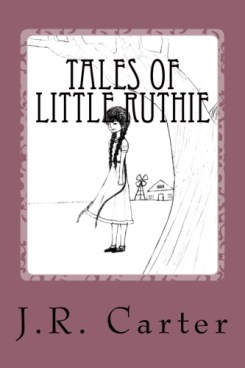 We were lucky when we were kids.  We had a creek nearby where we could go play.  All the kids in the neighborhood played there.  There was a tall sand rock on one side of the water and woods on the other side. Someone had hung a long rope from a tall tree, and it had a tire tied to it.  We used it for a swing.  I’m not sure who was nice enough to do that for us, but we had a lot of fun playing on it.

We would swing out across the creek and drop into the water.  I liked going there unless Leroy and Lindell were there.  They were the meanest kids in the neighborhood, and they lived right across the street from us.

On the side where there was sand rock, I could find little king snakes.  They were black with a red ring around their necks.  I liked to scare Margie with them.  She was kind of a sissy.  She didn’t like bugs or snakes or anything like that.  I didn’t like big snakes, but the little king snakes were all right.

One day when my daddy was at the creek with me, he showed me a crawdad.

“You know what this is, Ruthie?” he asked.

“It’s a crawdad.  Let me show you something.”

He turned it over, and under the tail was a whole bunch of little babies.  I couldn’t believe it!

“How did they get there?”

“That’s where they carry their babies.”

“There sure is a lot of them.”

“I’ll show you something else.  They’re good to eat.”

“I don’t think they look too good, Daddy.”

He built a little circle of rocks and told me to get some small twigs.  I did what he said, and he put some dry grass under the twigs.  Then he said to lift up some of the big rocks and catch the crawdads that were bigger and that had no babies.  We caught four or five, and Daddy pinched their heads off.  He pulled out a box of matches, lit one, and put it under the dry grass and twigs.  The next thing I knew, the fire started up!  He added some bigger pieces of wood to it.  I couldn’t believe it!  My daddy knew how to build a fire!  He sharpened two sticks, and he punched them into the crawdads.  He handed one to me.

“Just hold it over the fire and roast it just like a wiener.”

“Tell me when it’s ready, Daddy.”
It just took a couple of minutes, and he showed me how to peel it and where the meat was.  It would be all right if you were real hungry.  There wasn’t much to eat though.  A person could starve if that’s all he had.

“It was real good,” I lied.
What really got me excited was that my daddy could build a fire just like they did in the western movies!

“How did you learn to build a fire like that?”

“I was raised on a ranch, Ruthie.  You had to know how to build a fire.”

“Why did we come here?  Why didn’t we stay on the ranch?”

“It’s real hard work on a ranch.  Your mother and me were tired of working so hard.”

“Your mother cooked for the ranch hands, and I drove cattle.”

“I wish we still lived there.”

“I had to quit school in the fourth grade,” he said.

He just laughed at me and hugged me.  I learned a lot from my daddy that day.  I guess he knew how to build fires so well because he was Cherokee Indian.  He always told me that he and Johnny Trueblood were real Indians.  That meant I was Indian, too, and I was happy about that.  I learned how to build a fire.  I don’t know if that was good or bad for me, but I never did burn anything up.

After I learned how to build a fire, I did it all the time at the creek.  I even cooked a few crawdads.  The kids thought that was really something that I could build a fire.

One day we were playing and swinging on the tire.  Margie, Annie, Jeanie Lou, Novelene, and Charlie were with me that day.  We had been there for about an hour.  Then LeRoy and Lindell showed up.  I was on the swing, and they began to throw rocks at me.  They picked on all of us all the time.

I jumped off the tire, and all of us took cover in the woods.  We were trying to figure out how to get away from them.

“Y’all might as well come out ‘cause you ain’t getting’ away!  Were gonna beat you all up!  This is gonna be our place to play!  Y’all ain’t allowed here no more!” hollered Lindell.

“You just think you’re gonna take this place!  This is our placeI” I hollered back.

“You’re that Carter brat!  I know who you are!”  (There was that brat word again!)

“I’m gonna tell my big brother on you!  Then you will be sorry!”

“He ain’t nobody!  We ain’t scared of him!”  Lindell yelled.
“Well, you better be!  He will kick your butts if you hurt us!”

I didn’t know what to do.  I was talking all this talk about Junior, and I didn’t even know if he would help us.  Junior was sixteen or seventeen then.  They were about fourteen or fifteen.

“I am gonna try to run around the back way and get Junior,” I said.

“What if they catch you?”  Margie asked.

I took off the back way out of the woods trying to stay low so they didn’t see me.  I ran as fast as I could to the house.  I was yelling for Junior.  He came out the front door.  I guess he thought I was hurt.

Kenny, his friend, was with him.  I was talking so fast they didn’t know what I was saying.

“You gotta come with me.  We’re in trouble.”

We all took off running to the creek.  They really didn’t know why.  They thought one of us kids was hurt.  When we got there, you could hear Margie and my friends yelling.  Then we heard LeRoy and Lindell  saying what they were going to do to them.  They really meant to beat them up.  I could hear Margie crying.  Junior heard her, too, and he started running.  We could see them now by the creek.

“Hey, you little creeps!  Is that all you have to do is scare little kids?”

“You gonna stop us, Junior?”

By now we were down by the creek bank.  Junior was at least six foot tall, much bigger, and older than they were.  Kenny was not as tall, but he didn’t act scared at all.  All of us kids just watched and didn’t say a word.

Junior grabbed LeRoy by his arm and twisted it behind his back, just like he did to me, but harder.  He kicked him in the butt with the side of his foot.  Kenny tried to get Lindell, but he took off running.  He left his own brother there by himself.

“You kids can play here any time you want to.  These guys better not bother you either, or they are gonna be real sorry,” Junior said.

“Thanks, Junior, for helping us,” I said.

Junior started walking and pushing LeRoy in front of him.  Every once in a while he kicked him in the butt again.  I liked that.

They never did bother us anymore when we saw them at the creek, but they sure looked at us like they were still mad.  I wanted to run every time we saw them, but I didn’t.  I couldn’t let them know I was scared of them.  I had to act tough like my brother did.

I learned something about my brother that day.  So did my sister, Margie.  No matter what Junior said to us or how many times he called us brats, we were his little sisters, and he loved us. And I knew he would not let anyone hurt us if he was there to stop it.  I stopped hating my brother so much on that day, and I could tell that we all three had different feelings from then on.  We were nicer to each other.  I believe that was the day we all realized that we were siblings, and we loved each other.

I loved that creek, and I loved playing there.  I had two of the most important things in my life happen to me playing on that creek.  My daddy taught me about building wood fires and about crawdads.  Plus, I learned that the dummy, my brother, loved me.  I never called him dummy again.  He still called me brat, but in a nice way.  So, there you have it, another great day in the life of Little Ruthie.

Janice Sautter is a great great grandmother who spends her time writing, painting, drawing, and playing video games. She lives with her husband Jim and their two dogs, Daisy and Lilly. She writes under the name of J. R. Carter.