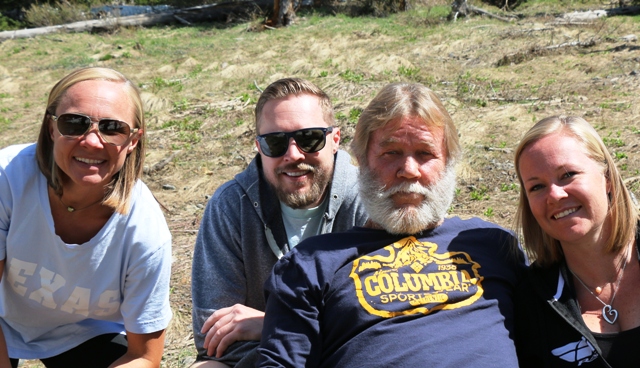 It’s odd the way certain words stick in a young child’s mind, especially the ones that are uttered just once even at a very early age.  As a small child I sat with my very ill grandfather watching an early television broadcast of John Ford’s The Quiet Man.  John Wayne plays Sean Thornton, an American boxer seeking solace after a bout that left his opponent dead.  There he finds more turmoil than solace and enters into a battle far greater than he ever experienced in the ring.  I watched as this strong, quiet type struggled to say how much he loved the woman who captured his heart (Mary Kate Danaher, played by Maureen O’Hara) but expressed it in so many other ways.  I still remember the warmth of a grandfather’s love every time I watch it around St. Patrick’s Day.  I own the DVD, but I prefer to watch it with commercials, probably because it’s the way I first saw it with Grandpa. I can quote almost every line, but what I remember most is what my grandpa said during my first viewing, “Find a man like that, Shirley Ruth, then marry him.”  I couldn’t have been more than four years old, but those words stuck long after my grandpa died.

When I first laid eyes on the blond-haired, blue-eyed guy who lived across the street from my childhood friend, I was smitten.  I asked my friend his name.  “Robert Thornton,” she said.  Thornton?  I had never met anyone with the name Thornton, and I was fairly certain that I shouldn’t pass up the opportunity to meet this fellow who carried the surname of the “quiet man” my grandpa told me to marry.  My friend introduced us, and that was that.  I learned that not only did he share the name, but he shared a birthday with – you guessed it – my grandpa. I knew that this was somehow a sign, and I set my sights on a young man who was strong as an ox, smart as a whip, wise beyond his years, kinder than anyone I had ever met, and as quiet as the guy in the film.  Just a few days after I graduated high school, we vowed to love and cherish each other for better or worse, for richer or poorer, in sickness and in health till death do us part.  Aside from accepting Jesus Christ as my Lord and Savior, marrying this man was the most important decision of my life – and a very good one indeed.

His presence in the lives of our three kids has made all the difference in the good, kind, loving, successful people they are today.  They are better people for what he taught them through the way he has lived his life.  He sees what is good in everyone, is generous and kind to those in need, holds no grudges, and truly loves unconditionally.  “I can’t very well point out somebody else’s faults when I have so many of my own,” he said to me once.  I’ll never forget those words because his faults are greatly overshadowed by that which makes him so easy to love and admire.  Where others study the way of Jesus, he lives it.

I thank God for the words uttered by my grandpa so long ago.  That tiny seed of wisdom led to a wonderful marriage of 41 years, three amazing kids who married great people themselves, and four beautiful grandchildren.  This quiet man who has always put his wife and children ahead of his own needs and desires is getting a fried chicken dinner with all the fixings today.  It’s a small gesture of gratitude he gets every Father’s Day, but one that he truly enjoys.  In the day-to-day living that goes on in this house that he built with his own two hands, I don’t always show enough appreciation for him and the very important role he has played in the lives of the people who call him Dad, Daddy,  orGrandpa. Just as he is so much like Sean Thornton in the film, I can be like Mary Kate Danaher.

Mary Kate Danaher:
What manner of man is it that I have married?

Hugh Forbes:
A better one, I think, than you know, Mary Kate.

Happy Father’s Day to fathers everywhere, but especially to the quiet man who has made my life worth living.